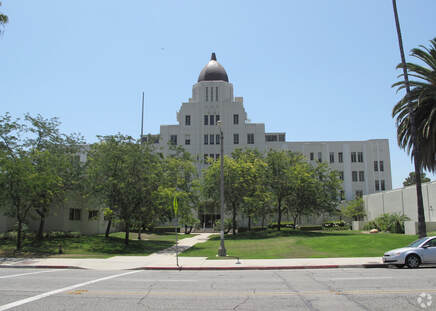 The hospital that was originally built in 1933 was abandoned in 2010, the old hospital has been used for a variety of Hollywood productions including Starsky and Hutch, Kill Bill, Scream Queens and the Academy Award winning La La Land (only a brief scene).  It was the perfect setting for scary scenes that demanded darkly lit windowless lobbies, and hallways lined with doors to rooms filled with moaning, bedridden patients. 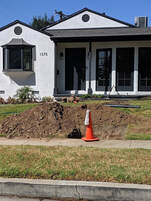 During the childhood years I lived on Roosevelt Street in Altadena, I can recall many days playing baseball in the street with 5 or 6 friends. We fashioned a backstop out of netting and 2 X 4's that had roller skates on the base so we could roll it off to the side when a car would come along. There was one old lady that lived alone up the street in a house completely painted purple. If someone hit the ball into her yard, Mrs. Purple would run out and confiscate it.
​
Every night after work my dad would play catch with me and my brother for a few minutes, then he and mom would enjoy a couple of chilled martinis before we all sat down for dinner. We had dinner together just about every night...

My best friend Bill had a pool and we spent every day of the summer vacation playing Marco Polo. The air quality in Pasadena in the fifties was so bad, after swimming we had to suck on ice for hours to reduce the congestion in our lungs caused by the combination of chlorine and smog. I lived right under Mt. Wilson and the media broadcast towers, but many days it was so hazy the mountains were cloaked in a grey haze. 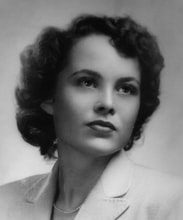 Before I came along, my mom was a Rose Parade Princess in the 1947 parade. My folks attended Pasadena City College and over his career, my dad spent a good amount of his professional time consulting at the California Institute of Technology Jet Propulsion Laboratory, while working for North American Rockwell developing the X-15, the first airplane that could leave the atmosphere and return to land on a runway.

He tired of the one hour commute (back in the 50's the Pasadena Freeway and the Harbor Freeway were just two lanes wide) to Inglewood everyday, so in 1960 we moved to Palos Verdes Estates.

​But before that happened, I remember being forced to ride in the car while my parents house hunted, first in Pacific Palisades and then in Torrance and Palos Verdes. It took them five years to find the right house, so we spent literally hundreds of days driving around looking at homes. Eventually my dad found a midcentury Young & Associates designed modern A-frame, open-beamed style 4 bedroom house still under construction. He was able to put a deposit on it and then make modifications to customize the finished product.

My first day at Montemalaga Elementary School (4th grade) was interesting. I noticed a beautiful blond-haired girl and she noticed me. Judy and I flirted for a few days before she invited me to join her in the storage closet where all of the playground equipment was stored. During recess, some students would sneak in and make-out. Later when I went to her home in Lunada Bay, we spent hours smooching in an old wine cellar in her huge backyard.

I was surprised that my new neighborhood was so much more sexually advanced than my old one.
Either that or Judy suffered from a histrionic personality disorder.

My long history of disenchantment with authority figures started in 5th grade. One of my teachers rudely told my friend (who was overweight and self conscious) to "slow down and save some for the other kids" when he was drinking from a water fountain after a rigorous dodgeball game. When I mentioned what I thought was a needless and inappropriate attack to my dad, he wanted me to report it to the principle. So the next day I did. Only to find out later that the rude teacher was having an affair with that male principle.

Nearby was a large tract of undeveloped land we called The Ranch. A friend's dad owned it with the idea that one day he would develop it into a housing tract. He got the permits and graded the roads and put in curbs. But for many years the rest of it was our private playground. The Chadwick Family lived in a big country house with a barn. Inside the barn we built a basketball court and the family raised a few dogs and chickens.

We built forts and tree houses, and bicycle obstacle courses. We harassed teenagers who would park at the end of the dark cul de sacs to drink beer and make out with their girlfriends. We held target practice with BB guns. And we got drunk after stealing some Jack Daniels from the Chadwick liquor cabinet.

I formed a bicycle club when we all got StingRay bikes for Christmas. I called it ECCO, which means "here we are!" We spent hours riding all over "The Hill" and through obstacle courses we built on The Ranch. We put playing cards through the spokes and fashioned ourselves as the local chapter of the Hells Angels.

We also got into building skateboards out of laminated wood we fashioned in woodshop at school, then screwing on a set of metal roller skate wheels. I remember more than one time riding my skateboard all the way down The Hill to Malaga Cove Intermediate School. Other times we would simply run down Peacock Canyon, a direct path to the bottom of The Hill. It was so thick with pine needles that it was like snow. You could run and tumble and slide and not get hurt. It took about ten minutes to get to the Malaga Cove Plaza, where we would have a warm cinnamon role and a cherry coke before classes started.

At 10 years of age I became an official LA County Junior Lifeguard. After six weeks of rigorous daily training, I had to jump off the Redondo Beach Pier, fully clothed, and disrobe while treading water, to be awarded the Certificate. Not bad for a punk 10 year-old from Pasadena!

Many days I would start off at the beach and then walk up the path to the Palos Verdes Swim Club and cool off in an olympic sized public pool with the ocean waves pounding the rocks below.

It was like living in a world class tourist attraction!

I can remember many warm 4th of July evenings laying on the school lawn watching fireworks going off right over head. As I think back on my intermediate school days I am astonished at how lucky I was to spend so much time at one of the most beautiful campuses on Earth. Plus, I played three years of Little League at the Malaga Cove sports field adjacent to the school. The whole facility is perched right on top of the cliffs overlooking the entire Los Angeles South Bay coastline. I was a major baseball lover. It was special to be able to play for the Malaga Cove Giants for three years. I made the Regional Little league All Star Team in my last season.

As we prepared to enter Pony League, my coach took me and a couple of other little league teammates to a Dodger Game. They were playing the San Francisco Giants, so we got to see our big league counterparts. That night, Sandy Koufax pitched his second no-hitter!

Later my coach announced he was migrating to Pony League and he wanted us on his team, so he told us he could "fix it" so we ended up on his team. I thought that was called "cheating" and I told him I was disappointed in him and was not going to move on into the 13-year-old league. That, it turns out, was a peek into the future of being disappointed by people in authority, and was the end of my organized baseball "career".

​The favorite plaything at that point was my Flexi-Flyer. Essentially a snow sled on wheels. I had a group of friends that all had them and we would find hills to race down all over PV. There were many areas that were still undeveloped, and therefore new streets were going in often. We found one that was at least a quarter mile long with a nice slope and fairly straight. Right after they laid the new sewer line under the road, but before it was open for traffic, we would pile two guys on a Flexi, and roll down the hill inside the pipes. There was just enough height for two guys laying on top of each other. At first it was pitch black, but eventually we would see a tiny "light at the end of the tunnel". 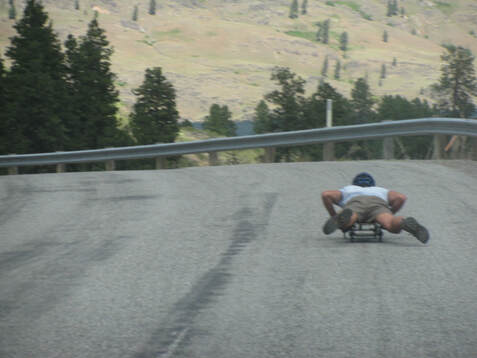